Unlocked iPhone 6 Plus – Refurbished Grade A

Max’s Deals our proud to present our limited supply of Refurbished and Unlocked Apple iPhone 5S that are in mint ‘like-new’ condition.

This iPhone will make a perfect holiday gift for your friends and family!

Grade A Unlocked Refurbished 16GB iPhone 5S. All of these iPhones have been tested by technicians and are in Grade A condition.

Available in Space Grey, Gold and Silver, and comes with our Max’s Deals 90-day Return Policy.

About the Refurbished iPhone 5S 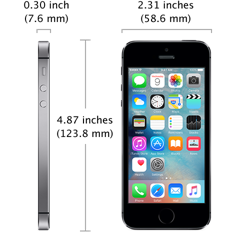 Following Apple’s method of releasing a phone to bridge the gap between two new flagship releases, here is the iPhone 5s. Stepping in to perform that role between the iPhones 5 and 6, the 5s brings new goodies with it. The difference with the iPhone 5s is that it incorporates a custom A7 processor. This makes it the only iPhone to do so. This has it firmly straddling the gap between A6 and the A8 used in the standard 5 and SE/6.

The big advantage of this decision means a step up from the standard iPhone 5. And all without the extra price tag that goes with the SE or 6. By doing this, Apple are appealing to people who would otherwise wait another release cycle before upgrading.

The iPhone 5s brings tomorrow rushing into today, and picks us all up along the way. We go on a journey which brings old and new together in a package that doesn’t disappoint.

Smartphone manufacturers definitely do play the Generation Game, especially with the processors they use. For the iPhone 5s, Apple have pulled a doozy out of the bag with the A7. Because the iPhone 5 series is already pretty good on battery usage, the 5s can easily handle the extra power needed. The A7 itself makes great strides in improving its own efficiency and further helps the battery life cause. What this translates to is an ultra-smooth graphics experience and plenty of muscle. Finally, there’s a battery to get you through even the most demanding app use.

Apple’s legendary 4” display is here, and brings a resolution 1136 x 640px resolution, but with a massive 326ppi pixel density. This means it’s ultra-sharp with outstanding colour rendition and is just a joy to use, even for long periods. Corning Gorilla Glass protects the screen from the usual bumps and scrapes of the day and a fingerprint-resistant oleophobic coating.

The iPhone 5s does more, though, than just look nice. It brings a new level of performance to its class, and has made the competition take serious notice. The iPhone 5s opened new worlds for smartphone users almost without breaking sweat.

A Night At The Pictures

The rear camera of the iPhone 5s is 8MP. There’s a dual-LED flash setup and the geo-tagging of photos is automatic. The camera has face detection and can produce both HDR and Panoramic images easily and quickly.

Video recording is available at 1080p Full HD resolution, and can even record 720p video at 120 frames per second. This allows for great slow-motion recordings, and is something which the iPhone excels at. The front camera performs superbly, using every one of its 1.2MP, and has been designed for maximum performance using Facetime or taking selfies. The front camera also has face detection and HDR capability and can record video at 720p resolution.

Apple have always punched above the iP{hones weight with images, so the quality here is no surprise. What is a surprise, though, is that they’ve managed it without increasing the size of the device in any significant way. Apple would have found it easy just to up the bulk to get all the good bits in, but they chose not to. By doing that, users get to adapt quickly, and on familiar terms.

Staying Connected With The iPhone 5s

Apple have long led the way with the features they have included on iPhones. As well as being the first to use wi-fi in any meaningful way, they amde tethering hugely popular.

Happily, both are included on the 5s, up to speeds of 802.11 b/g/n. There is also Bluetooth 4, and A-GPS with GLONASS for perfect location mapping.

The iPhone 5s is 4G ready, and also carries the fallback of 3G and even 2G in case it’s ever needed. This means you’re covered on just about any GSM network worldwide.

The 1560mAh batter powers everything along superbly by providing 10 hours of talk time or 10 days of standby. The iPhone 5s set a new height for the smartphone world when it was released. It is testament to just how good it is that it is still every bit as valid today.

How long does postage take?

Postage and shipping should take no more than 5-7 days within the UK (and is FREE). We also offer a 1-3 days expedited postage option for only £7.

International shipping may take a few extra days. If timing is an issue (and you are an international buyer), please contact us before you make the order.

What’s in the box